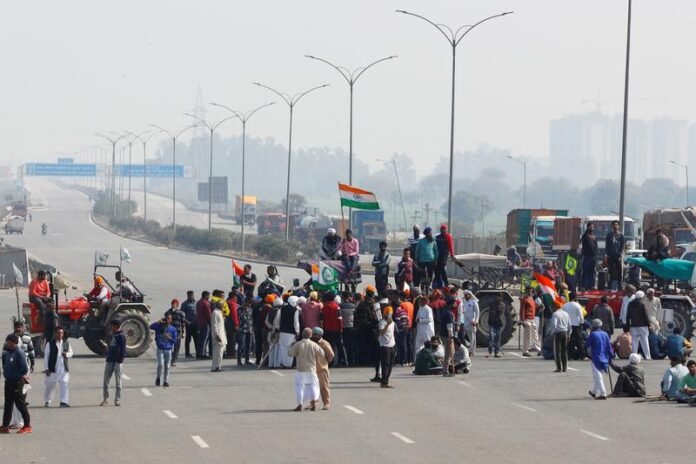 KUNDLI, India (Reuters) – Thousands of farmers across India blocked roads on Saturday with makeshift tents, tractors, trucks and boulders to pressure the government to roll back agricultural reforms that have triggered months-long protests.

While the initial protests were started by rice and wheat growers from northern India who camped out on the outskirts of New Delhi, demonstrations have spread across the country, especially in states not ruled by Prime Minister Narendra Modi’s party.

The federal government has offered concessions to the farmers but refuses to repeal three laws passed last year that it says are crucial to bring new investment to the sector, which accounts for nearly 15% of India’s $2.9 trillion economy and about half its workforce.

Farmers fear the reforms will leave them at the mercy of big corporate buyers, gradually ending the current practice of assured government purchases.

Saturday’s three-hour “chakka jam”, or road blockade, started around noon across the country, except in New Delhi and a couple of neighbouring states. The protests were largely held on national and state highways but it was business as usual in most cities.

Avik Saha, a secretary of the All India Kisan Sangharsh Coordination Committee, an umbrella organisation of farmer groups, said about 10,000 places across India were blocked in the three hours.

“Today’s chakka jam clearly showed the government that this is an all-India protest,” Saha said in a video address on live streaming platform Periscope.

On a highway near the capital, some farmers smoked hookah as songs played on a loudspeaker.

Farmers squatted on the road in the eastern state of Odisha and Karnataka in the south with flags and banners protesting against the laws. Some carried placards urging the government not to treat them as enemies.

“Farmers across the country are united against this and we will continue to stand together until the black laws are repealed,” Dilbag Singh, a 65-year-old farmer protesting in Kundli near the Delhi border, told Reuters.

Tens of thousands of farmers have been braving New Delhi’s winter by sleeping in the open for months on national highways. Their protests have mostly been peaceful but a tractor rally on Jan. 26 flared into turmoil as some farmers clashed with police.

Since then, authorities have shut down the mobile internet in parts of the national capital and heavily barricaded border roads to prevent protesters from coming into the city again.

“The rights to peaceful assembly & expression should be protected both offline & online,” the Office of the United Nations High Commissioner for Human Rights said on Twitter, calling on authorities and protesters to exercise “maximum restraint.”

“It’s crucial to find equitable solutions with due respect to #HumanRights for all.”

The issue has also caught international attention with celebrities such as pop star Rihanna and environment campaigner Greta Thunberg announcing their support for the farmers. The United States has also urged India to resume talks with the farmers.

Reporting by Adnan Abidi in Kundli and Jatindra Dash in Bhubaneshwar; additional reporting and writing by Abhirup Roy; Editing by Kim Coghill and Christina Fincher